"It all began on a shoestring" is the way Arthur Vesey described the beginning days of Veseys Seeds. From a very young age, Mr. Vesey operated a market garden in the rural community of York, Prince Edward Island. During his market garden years, he was keenly interested in securing and testing seeds that were suitable for the cool, short growing seasons of Atlantic Canada.

When ordering his own seeds, he soon began to include seed orders for his neighbors. This eventually led to the establishment of a small retail seed business located in one room of his home. Obtaining a small kitchen scale, and old cracked dish and spoon, the business was born. Speaking of his own gardening experience Mr. Vesey said, "I was preparing for the seed business and I didn't even know it".

Arthur's seed business soon outgrew the facilities of his home and in 1948 construction was completed on a store, a packaging and mail order area, as well as staff living quarters. Over the decades, growth demanded several other expansions to the building as can be witnessed by the many interesting rooflines of Veseys present headquarters.

Since 1939, Veseys seed has been tested and packaged on the premises in York. Today, automated packaging has mostly replaced what had been done by hand. However, many small and delicate flower seeds are still packaged by hand using a combination of measuring devices not unlike the original spoons and scoops of Arthur's day.

Having enjoyed moderate growth over the years, Mr. Vesey hired B.E. (Bev) Simpson in 1956. Mr. Simpson's ideas, youth and energy contributed greatly to company growth. Soon, Mr. Simpson became a business partner and in 1980, upon the retirement of Mr. Vesey, Bev became president of the company and along with his wife, Shirley, took full ownership of the business.

Even after the seed business was well established, Mr. Vesey continued his market gardening. This allowed him to test new varieties in order to compare their performance alongside existing strains. Veseys continues to be involved on the commercial side of agriculture not only on Prince Edward Island but throughout Canada and beyond. Commercial sales of such items as broccoli, cauliflower, cabbage and carrot seed have grown consistently over the decades and Veseys is proud of its relationships with the market gardeners that look to Veseys Seeds for knowledge and supply. Veseys President, Mr. Bev Simpson, was himself a major market gardener on Prince Edward Island before devoting his full time efforts to the growth of the firm. Bev continues to be the main link between Veseys and its commercial growers. 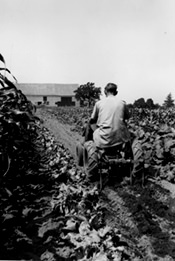 Since Veseys conducts extensive field trials of each variety offered in the catalogue, many commercial growers look to their results before making decisions on what they will plant in large quantities. Bev's reputation as a quality grower, Veseys research in finding suitable varieties for this climate and a tradition of excellence that spans 8 decades, has most definitely had a positive impact on agriculture in this region. Continuing this tradition today, every variety in Veseys catalog has been carefully tested at the Veseys 40-acre research farm. Within this research facility, literally hundreds of varieties are planted, maintained and evaluated by Vesey's staff for vigour, earliness, flavour and disease resistance.

In 1999, as Veseys Seeds approached its 60th anniversary and the arrival of a new century, the Simpson's felt that it was time to celebrate these events with a brand new initiative. Having surveyed a broad selection of Veseys customers the previous year, it was discovered that a high percentage of all respondents planted bulbs. This was very encouraging news as a bulb catalogue has long been a desire of the company.

Fueled with what appeared to be a ready market, Veseys next step was to form a relationship with a grower. Through their association in the mail order gardening community, it wasn't long before Veseys were discussing this project with Holland's most prestigious grower of bulbs. As discussions unfolded, the company established three primary criteria: Firstly, Veseys only wanted to carry the highest quality bulbs available in Canada - so as to meet the expectations of their dedicated clientele; secondly, the firm wanted to offer a selection of fall planting bulbs and perennials that would be unequaled in any other Canadian catalogue; thirdly, they hoped to achieve their first two goals while at the same time being able to guarantee the gardeners of Canada that the Veseys Fall Bulb & Perennial catalogue would have the lowest prices of any Canadian catalogue competitor!

This was a very tall order to fill and the company was proud to report that they accomplished this goal with their first publication of May 1, 1999. Since that initial launch, Veseys has continued their highest quality guarantee and their bulb catalogue titles now include a Fall Bulb & Perennial catalogue, a Spring Bulb & Perennial catalogue as well as Fall and Spring Fundraising catalogues. With the addition of these new catalogues, Veseys annual mailings have now surpassed the 1.2 million figure. 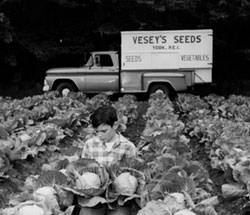 Keeping current with market trends has always been a priority with Veseys Seeds and early recognition of the potential within the internet has helped in company growth. Veseys Seeds was one of the first seed companies to have a presence on the web. As early as the spring of 1996, veseys.com was an information site which provided interested gardeners with a wealth of gardening tips, climatic charts and general knowledge of gardening. On December 15th of 1998, this original site was replaced with the first half of a newly developed web site. Here, Veseys expanded the amount of information available and added such features as an electronic newsletter, an interactive gardening forum, photo postings of their customers results, employment opportunities, press release, history of the company and many more new and improved services. One month later on January 13th, Veseys completed the second half of their new site, which was the electronic catalogue. As of that date, visitors to veseys.com can now browse through every category available in the various printed catalogues and order with confidence on line. Since going live with the online catalogue, sales have represented 32% of total sales with much of this business coming from brand new customers. As things are always changing and improving in the internet world, Veseys is constantly redeveloping its e-commerce gardening web site to better serve their electronic customers.

In 2003, armed with what the company had learned from entering the bulb business, Veseys determined that following a two year successful test with roses and shrubs in its seed catalogue, that it was now time to launch Canada's most complete stand alone catalogue of roses and flowering shrubs. This publication was met with rave reviews in Canada and the United States and the company was quite proud of the fact that famous Rosarian David Austin lent his name to the catalogues introductory remarks. With the addition of this catalogue, Vesey's catalogue circulation now grew to 1.7 million catalogues annually.

In 2004, Veseys solidified a long standing relationship with the manufacturer of the famous American made Mantis Tiller. An exclusive mail order agreement was reached between Veseys and Mantis and commencing on December 1, 2004, Veseys now markets and ships the Mantis Tiller and accessories to gardeners throughout Canada. 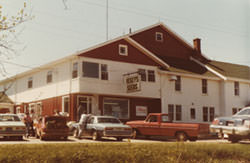 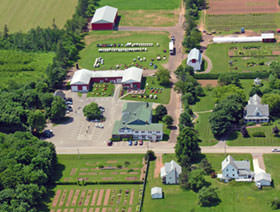 The last few years at Veseys Seeds have been extremely busy and rewarding. Veseys staff, which swells to over 100 individuals in season, has raised the bar of excellence in customer service and satisfaction. Sales growth has been at its highest level in the firm's history and innovative strategies have been developed to further expand Veseys reach in the North American mail order gardening market. Many new initiatives are on the drawing board for the coming months including the establishment of a wholesale seed program, penetration of new market segments and an expanded production facility in the company's beautiful home community of York, Prince Edward Island.